Destroy mankind and all its creations.

The Wendigo, also known as the Hollowed, was a type of Creature of Grimm that was proposed to appear in the animated webseries RWBY. It is unknown if it would have been an entire species or a singular creature.

It was created by Mayuki.

In 2020, Rooster Teeth Animation partnered with Full Sail University to hold a contest in which people could submit their own Creatures of Grimm to appear in their animated webseries RWBY. Among the finalists was the Wendigo.

Like all other Grimm in the series, they would have been created by the God of Darkness to destroy mankind and all its creations. The Wendigo would have been an extremely tall, skeletal humanoid Grimm with a head resembling a deer skull. It would have been shrouded in black mist and had the ability to create hallucinations in its prey. It would then open its ribcage to grab and absorb its prey.

However, the Wendigo Grimm received backlash from the 2020s "cancel culture" trend; as it was an adaptation of the creature of the same name from Native American mythology and culture, the design was accused of being cultural appropriation and racially insensitive. The design was also accused of copyright infringement, though this was disproved. Even after the creator changed the name to "the Hollowed" (as part of the controversy revolved around the fact that writing/reading/speaking the name "Wendigo" was taboo in Native American cultures), the controversy still continued and the artist began to receive threats. Despite growing support for the design and the artist, Rooster Teeth decided to disqualify the Wendigo and remove all mention of it from the contest. Though the artist was upset, they supported Rooster Teeth's decision and supported the other finalists. Rooster Teeth maintained ownership of the design. 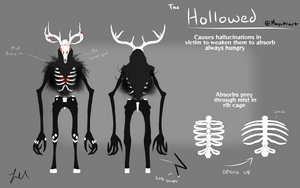 The Wendigo after being renamed "The Hollowed".