The Light was intended to be a mini-boss in the 2017 video game Cuphead. He was an odd green creature that would have served as one of King Dice's minions in the "All Bets Are Off!" level.

The Light would have been one of the bosses encountered on King Dice's game board. In the finished game, Cuphead and Mugman can roll a die and progress a number of spaces. Depending on the space they land on, King Dice will transport them to a different battle with one of the casino bosses.

Though little is known about the Light, its scrapped boss fight (that can be accessed in the game's debug mode) has the boss in the center of the screen with laser beams shooting off from it and placeholder projectile sprites (called Jareeds) ricocheting from its sides. The lasers would have spun around and changed color, only dealing damage when they were a certain color.

The Light was likely scrapped early on in the game, as its projectiles and graphics are mostly basic shapes and placeholder graphics, and the boss itself is crudely drawn and has no animation of any kind. The Light is presumed to have been intended as some kind of disco ball or dancing light, but was cut either for time, to make the level shorter or easier, or because it did not fit the design or aesthetic of the game. 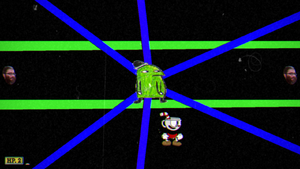 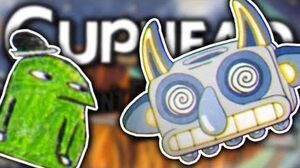