Absorbing Paint from all cartoons

Destroy and escape the Wasteland.

Scrapped Bigger Bad
The Storm Blot was originally the true main villain of Epic Mickey before it was scrapped.

Not much information is known about the Storm Blot aside from it being an earlier incarnation of the Shadow Blot during development of the video game Epic Mickey. Concept artist Don Hamilton uploaded game art on the internet showing what appeared to be the Shadow Blot merged with Oswald the Lucky Rabbit terrorising Dark Beauty Castle.

Don wrote that the game's creative director Warren Spector wanted Oswald's jealously toward Mickey Mouse to grow to the point where he became a monster, leading many to believe that Oswald eventually combined with the Blot to destroy Mickey and escape the Wasteland.

However, Warren Spector has denied that Oswald was intended to become the Blot and additional concept art shows both Mickey and Oswald standing beside one another as they confront the Storm Blot at Dark Beauty Castle. It's unknown exactly why the Storm Blot was scrapped from the game, but it's likely to avoid depicting Oswald too negatively. 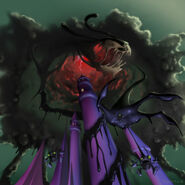 Mickey and Oswald versus the Storm Blot.