Scar (King of the Jungle)

King of the Jungle

Take over the Pride Lands.

In the original draft, Scar was intended to be a baboon that led his clan in a war against the lions. However, this was later changed to him being a monstrous rogue lion that allied himself with the evil baboons and led them against the lions. The filmmakers later decided to give him a personal vendetta against the heroes, and made him Mufasa's envious younger brother.

In the original script, Scar tried to break Simba's neck after killing Mufasa. But before he could do that, several animals spotted him and fell under the mistaken belief that he was trying to save Simba. Subsequently, Scar was forced to raise Simba. Because of this, Simba grew up with Scar instead.

Scar also had a deleted reprise of his song "Be Prepared"-in which he tried to force Nala to become his mate. She refuses, so he has her banished from the pride lands. The scene was cut for being considered inappropriate, but was later added in the stage musical adaption of The Lion King.

In the original ending, he also tried to throw Simba off a cliff when the latter tried to save him. 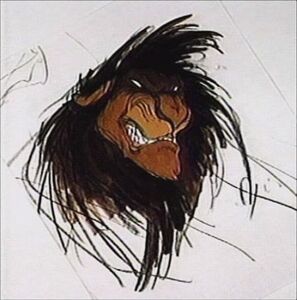 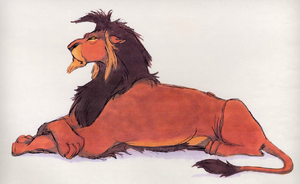 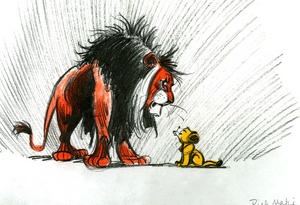 Scar and the hyenas in the original concept art