Dating and luring African-Americans to her house.

To help her family gain pseudo-immortality for themselves and the Order of Coagula (failed).

To kill Chris Washington (failed).
To frame Chris as a psychotic killer (succeeded).

Seductive Traitor
Rose Armitage is the main antagonist of Jordan Peele's comedy-horror film Get Out, as well as the alternate ending for said film.

She was portrayed by Allison Williams in her film debut.

The alternate ending starts off where Rose is shot in the stomach by the man her grandfather is possessing (who immediately commits suicide by shooting himself in the head, killing her grandfather in the process) after Chris has killed her entire family in self-defense. As she lies bleeding onto the street, Chris attempts to strangle her. However he is stopped by a police car that drives by. Rose then yells for help, in an attempt to frame Chris as a vicious murderer who tried to kill her. In the official ending, the police car is revealed to have been driven by Chris' best friend, Rod Williams. However, in the original ending, it was supposed to be two white police officers who arrest Chris.

Rod later visits Chris in prison, who admits he can't remember any of the details involving his killing of the Armitage family-thus making it hard to prove he was acting in self-defense. It remains unknown as to what happened to Rose, though it can be assumed that she was taken to the hospital and was saved, getting away with her crimes in the process. Jordan Peele had this ending in mind because he wanted to show further how common racism is, even in our modern society. However, test audiences where furious with the ending, so they changed it. 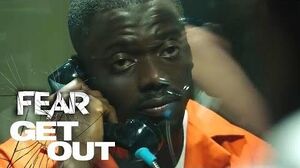