Thomas and the Magic Railroad

Find Lady and destroy her (failed).

Passing Through Boomer[1] was to be the main antagonist of the 2000 family adventure-fantasy film Thomas and the Magic Railroad, based on the TV series Thomas the Tank Engine & Friends and Shining Time Station by Britt Allcroft. He was cut from the film due to a complaint from test audiences that he was too menacing and scary for a younger audience, and Diesel 10 was rewritten as the main antagonist. In the workprints, he is the antagonist. However, he accidentally appeared in the trailer as a cameo. He is Burnett Stone's arch-nemesis.

He was portrayed by the late Doug Lennox.

Few years ago, P. T. Boomer was jealous of the relationship that Burnett Stone had with Tasha and bullied Burnett into allowing him to take Lady for a run. After crashing her, he left Shining Time while Burnett spent years trying to restore her, to no avail. Boomer is described in the script as being "a drifter through choice". He returns now a good forty years later a bitter and dark character bent on getting rid of Lady.

Boomer is the reason behind Mutt's unease, and reason for bringing Lily to Shining Time rather than letting her go on to Muffle Mountain. Boomer spends much of his time throughout the movie arguing with Burnett Stone and digging into the mountain looking for Lady.

He has no ownership or connections with Diesel 10, other than their shared desire to destroy Lady. He does not believe in magic and when he finds Thomas in the real world, he believes that he's just a huge toy. Thomas is the reason why Boomer ends up on Sodor: he's transported back in Thomas's cab on the way back through the Magic Railroad. When Thomas and Lady arrive back on Sodor, Diesel 10 arrives, just as Boomer flies through the magic buffers. Landing on Diesel 10's roof, he declares that he is after Lady as well, to which the former declares "that makes two of us!" Boomer spends the chase throwing taunts at Burnett, to which Burnett declares that "the magic [he] refuse[s] to believe in will get the better of [him]".

He and Diesel 10 meet their fates during the chase scene when they plunge off the viaduct into a barge filled with sludge. After this, it is unknown what happened to Boomer, though it can be assumed that he was Found, rescued, and taken into police custody.

Boomer is a resourceful, manipulative and opportunistic man who has drifted from situation to situation, making money wherever he can - usually out of others misfortunes. He is an emotionally muddy man who is obsessed with cleanliness and order. Now he is out of opportunities, except one - to return to Shining Time with only himself, his motorcycle, a life long grudge, and a thirst for revenge.

When audiences complained about him being too menacing and scary for children, he was cut out at the last minute then it was been changed of Diesel 10 as the main antagonist, explaining the laziness of the movie's final cut. In the final cut, he can be found as the motorcycle rider that Burnett was in the process of giving directions (in the original cut the two were having a row). Even so, something seemed very dark about said character. Additionally, during the chase sequence, he can be seen lying on the back of Diesel 10's cab in several scenes. Boomer was also present in a trailer for the movie, falling off the viaduct with Diesel 10.

Many scenes pointing towards his role are seen as well, such as Billy Twofeathers holding flowers while speaking with Stacy Jones. In the said scene Billy and Mutt encounter P.T. Boomer waiting for them on the Shining Time Station platform. After a confrontational exchange about Burnett Stone's whereabouts and being stonewalled by Billy, an enraged Boomer leaves, but not before taking a swing at the hanging flower basket that Mr. Conductor had watered earlier. The script describes Billy picking up the flowers that have dropped onto the ground.

Also, while driving Lily to see Burnett, Stacy is seen holding a photograph. Even though in the movie its not clear as to what it is, according to the original script, it was a picture of a younger Burnett and Tasha during a school dance with P.T. Boomer angrily eyeing the couple.

Also, after Billy Twofeathers waves to the children, in the original cut, from Billy's point of view he would see a motorcyclist (Boomer) racing across the hillside. He purposely cuts in front of the train at the crossing, startling Billy to apply the brakes and blow the locomotive's whistle. The tense atmosphere of this shot was enhanced by Britt Allcroft including a flock of panicked birds suddenly taking flight upon hearing the whistle's shriek.

Boomer's actor, Doug Lennox died in November 28, 2015 at the age of 77. In honor of his memory, an uncut version of the film's final chase with clear audio was uploaded to YouTube by the channel TTTEArchives. 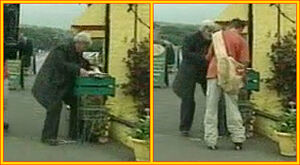 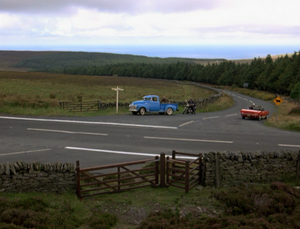 P.T. Boomer on a motorcycle. 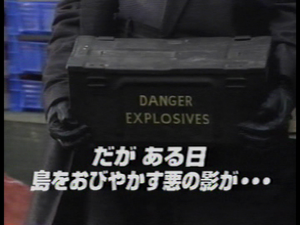 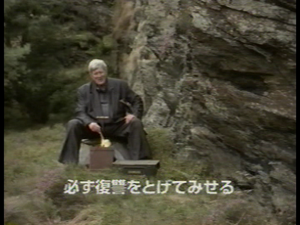 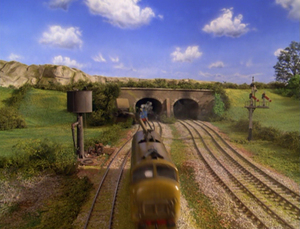 P.T. Boomer atop of Diesel 10 from the Chase Scene (which it was founded on the final cut) 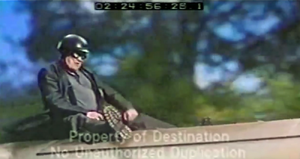 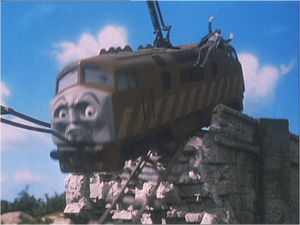 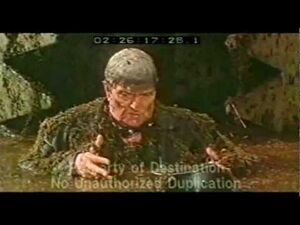 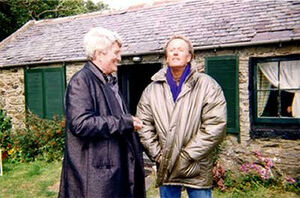 A photo of Doug Lennox and Peter Fonda when they started filming. 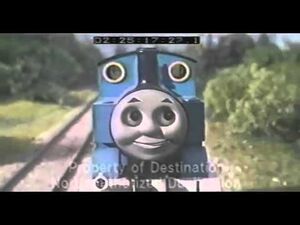 Thomas and the Magic Railroad PT Boomer Chase Scene
A scene that is shown that P.T. Boomer had been cut. 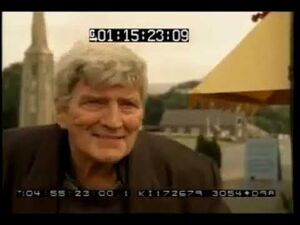 Thomas and the Magic Railroad Workprint - All P.T. Boomer scenes