Get revenge on Spider-Man

Vengeful
Quentin Beck, also known as Mysterio, was intended to be a minor antagonist in Sam Rami's cancelled film Spider-Man 4.

He was intended to be portrayed by Bruce Campbell.

Mysterio's role in the film was intended to be minor, only appearing in a scene where Spider-Man delivers him, already beaten and captured, to the police department after a string of robberies and assaults using theatrics. As the police unmask Mysterio and laugh at him, he swears revenge on Spider-Man.

He was intended to be portrayed by Bruce Campbell, as a part of a running joke from the film series where the actor appeared in every film as a different character. Before the release of 2019's Spider-Man: Far From Home (which featured a version of Mysterio), Campbell confirmed that he was going to appear in Spider-Man 4 as Mysterio before the film was cancelled due to Spider-Man 3's poor reception. 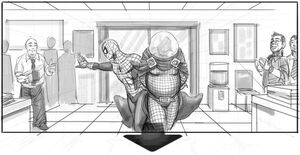 Add a photo to this gallery
Retrieved from "https://unpublished-villains.fandom.com/wiki/Mysterio_(Spider-Man_4)?oldid=1643"
Community content is available under CC-BY-SA unless otherwise noted.