The SpongeBob Movie: Sponge Out of Water

Passing and teaching her students (abandoned)

Give an F- to SpongeBob for crashing (succeeded)

Apocalyptic Control Freak
Mrs. Puff is one of the main characters of SpongeBob SquarePants. She is the teacher of the titular character at her own boating school. She is a paranoid pufferfish who wears a sailor uniform. Though Mrs. Puff has been depicted with neutral and antagonistic roles in the series, however, a deleted scene of the 2015 film The SpongeBob Movie: Sponge Out of Water depicted her in much darker role, becoming one of the Bikini Bottomites affected by the disappearance of the Krabby Patty secret formula and turning into a dangerous and reckless survivor, though for the film's sake of humor.

She was intended to be voiced by Mary Jo Catlett, who voices her in the show.

Main article: For more information about Mrs. Puff in the show, see here

Originally, it was planned for The SpongeBob Movie: Sponge Out of Water to include an scene after Spongebob and Plankton return to Bikini Bottom, which has turned into an apocalyptic state following the disapperance of the Krabby Patty formula thanks to Burger-Beard's machinations. In the scene, an skull-masked driver chases Spongebob and Plankton in a boatmobile chase with a monster boattruck. The song "Squeeze Me" plays out on Plankton's radio until the boat crashes. As a result, the masked driver reveals herself to be a disguised Mrs. Puff and warns SpongeBob that he will pay the ultimate penalty for his reckless driving, taking her bag full of torture devices and taking a red pen, which she uses to give SpongeBob a failing grade.

However, the scene had to be deleted due the directives of Paramount Pictures, likely because it was unsuitable for kids, depicting an extremely dangerous situation which ends with a silly resolution. The animatics of the deleted scene was included in the film's Blu-ray release. In the finished film, Mrs. Puff still makes an appearance, but with her normal clothes instead of apocalyptic ones and in a cameo role. 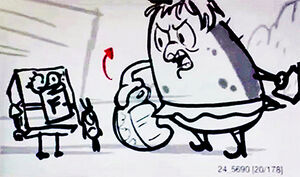 Mrs. Puff failing SpongeBob for crashing after the chase.
Add a photo to this gallery

Retrieved from "https://unpublished-villains.fandom.com/wiki/Mrs._Puff?oldid=3067"
Community content is available under CC-BY-SA unless otherwise noted.