Mr. Friendly was a monstrous villain cut from the 1998 video game Half-Life. It would have been a giant Xen monster that would have eaten the corpses of dead NPCs and enemies, which would have been an explanation for the models disappearing. If encountered, it would have attacked with tentacles and vomit, attempting to fatally rape Gordon Freeman.

Mr. Friendly was based on concept art by Ted Backman, and was intended to be a boss-like enemy that would have raped the player character Gordon Freeman to death. Managing director Gabe Newell liked the idea, and the enemy's behavior was expanded to include scavenging dead corpses. The game periodically removed dead NPCs to improve game performance, and Mr. Friendly was intended to be the explanation for it as it would go around and eat the dead corpses. If encountered, it would attack with its tentacles. In early ideas, it would have knocked Gordon's Freeman's glasses and made the player's vision blurry temporarily, though this was cut for the technology not being good enough to handle it. It would also stand up on its hind legs and vomit acid. Mr. Friendly's perverted behavior was intended to scare the game's target demographic, teenage boys, from performing sexual actions before the appropriate age.

It was cut for unknown reasons, though it is possible that its nature and actions were considered too extreme for the time period and could have possibly warranted an AO rating. 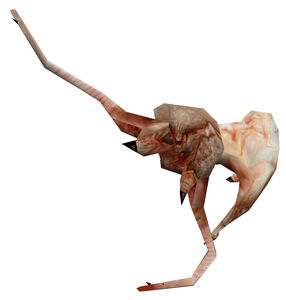 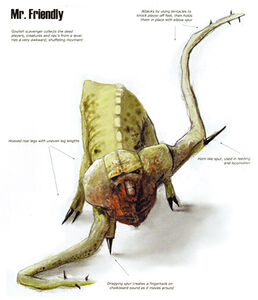