Kingdom of the Sun

Assist Yzma on her plans to summon Supai.

Comical Henchmen
Mick, Bowie and Lemmy were intended to be the secondary antagonists in the unmade Disney animated feature Kingdom of the Sun. They were three revived mummies who assisted Yzma on her plans to destroy the sun. The film was later tweaked into The Emperor's New Groove, but Mick, Bowie and Lemmy weren't kept and were replaced by the comical Kronk. The history of the unreleased film would later be detailed in the 2002 documentary The Sweatbox.

Mick, Bowie and Lemmy were a trio of reanimated mummies who would have served Yzma on her crusade to use her dark magic to not only gain control over the kingdom, but summon the evil Incan god of darkness Supai to block out or destroy the sun so she may live in a world of everlasting darkness where the sun cannot age her further.

Not much is known about the trio, aside that they were going to be the film's comic relief alongside Hucua. It can be implied that Mick, Bowie and Lemmy would have been defeated at the end, possibly after Supai's destruction and Yzma's death. 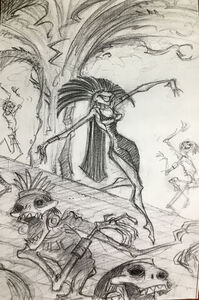 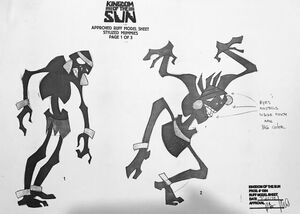 Retrieved from "https://unpublished-villains.fandom.com/wiki/Mick,_Bowie_and_Lemmy?oldid=2042"
Community content is available under CC-BY-SA unless otherwise noted.