Kylo Ren (Duel of the Fates)

Mastery over the dark side of the Force

Studying to be a Jedi.

Executing and torturing his enemies.
Studying the dark side of the Force.
Unleashing his wrath by destroying everything in his path.
Speaking to Vader's charred mask.
Ruling the First Order. (all formerly)

All his goals from the previous films.

Eliminate all those who posed a threat to Snoke (partially succeeded)
Learn everything from Tor Valum to become a real Sith (succeeded)
Find Mortis and harnass the untapped power beyond anything the Jedi have ever known. (failed)
Convince Rey Solana to join him or kill her (failed, later abandoned).

All his crimes from the previous films

Kylo Ren, originally born as Ben Solo, is the central antagonist of the Star Wars sequel trilogy. Although he appeared as the main antagonist of both The Force Awakens and The Last Jedi before redeeming himself in The Rise of Skywalker, it was intended for Kylo's fall to the dark side of the Force to be complete and become the trilogy's main antagonist in the Colin Trevorrow's version of the Episode IX named Duel of the Fates, which was an early script for the final installment of both the sequel trilogy and the Skywalker Saga as a whole.

He was intended to be portrayed by Adam Driver as in the final project.

About ten years after the Battle of Crait, the First Order has spread to the farthest reaches of the galaxy under the command of Supreme Leader Kylo Ren, and all traitorous acts are punishable with death. Determined to suffocate a growing unrest, Ren has silenced all communication between neighboring systems while his mother Leia Organa continues to lead the Resistance to fight against his tyrannical rule. During this time, Ren has taken over Coruscant to house the First Order Capitol and promoted General Hux to Chancellor, while he resides in the abandoned castle of his grandfather Darth Vader on Mustafar, seeking to uncover it's secrets.

Following the Resistance's theft of an Eclipse-class dreadnought from the Kuat Colony and Biss Kova's execution at the First Order Capitol, while the Knights of Ren are dispatched to eliminate Rey, Kylo Ren is seeking for more knowledge about the dark side of the Force. As he does so, the Force spirit of Luke Skywalker appears to taunt him as usual, with Kylo asking his uncle to not bother him as he is about to become more powerful than any Jedi despite Luke's pleas to bring back Ben Solo and send him home to Leia. With Luke's spirit gone, Ren finds what he was seeking: a Sith holocron which belonged to Darth Vader. Upon opening it, the holocron plays out a recording of the late Emperor Palpatine, who instructed Vader to take Luke Skywalker to the Remnicore system should he struck him down so he could be properly trained by the Sith Master Tor Valum to harnass the untapped power of Mortis.

However, the holocron scans Kylo Ren and shoots red lightning into his eyes upon detecting that he isn't Vader, much to Kylo's pain. With no time to lose, the Supreme Leader goes to the First Order Capitol and several medical droids operate him, with layers of Mandalorian iron being smelted on his face. Kylo's pain is felt by Rey, who can't stop dreaming about him and whom she still hopes to redeem. They then share the same Force vision, which involves them fighting in an ancient temple with two massive thrones before Kylo strikes Rey down. Later on, Kylo dons a new mask for himself before meeting with Chancellor Hux, who informs him about the current situation before Kylo notifies him that he will be searching for Mortis and will track down Rey himself, as the last Jedi has been giving hope to the galaxy. Before leaving Coruscant, Kylo takes the mask of Darth Vader and assures it that he now understands that he allowed love to cloud his judgment and that he will succeed at what he failed as he throws the mask off the balcony of his chambers, shattering upon impact.

Accompanied by his drone VX-20, Kylo Ren sets course to Remnicore whereas the Knights of Ren track down Rey, Poe Dameron and Chewbacca to Bonadan. Upon arriving at Remnicore, Kylo finds an ancient stone military battlement and meets Tor Valum, who presents himself as no master. Confident, Kylo asks Valum if he trained Darth Plagueis, Palpatine's Sith Master, but Valum responds that such name doesn't mean anything for him, leading Kylo to threaten Valum's life until Valum realizes what Kylo wants, accepting him as his new apprentice by telling him that if he wants to cheat death the secret is to take life. Meanwhile, on Bonadan, Rey and Poe meet a five year old alien child named Nomi, who warns Rey about what will happen if she faces Kylo on Mortis.

Back on Remnicore, Kylo Ren Force drains the living force of a three-husked Gronk Boar until he reduces it to a husk, ending his training under Tor Valum. As Kylo asks for more, Valum sends him to an icy cave where there's a vergence. Kylo does so and faces a Force vision of Darth Vader on the cave, but the Vader vision strikes him down. Exiting the cave, Kylo asks Tor Valum about Mortis' location but Valum regards him as still unworthy of its power, leading Kylo to drain Valum's Living Force until reducing him to a withered shell, something which Rey senses before finishing off the Knights of Ren with the help of Poe and Chewie while Finn and Rose Tico project an holographic broadcast of Leia Organa urging the inhabitants of the galaxy to join their cause and fight for freedom. Upon leaving Remnicore, Kylo communicates with Hux and orders him to prepare his forces to fight against the Resistance.

Upon arriving at Mortis, Kylo Ren visits a house on the woods where meets a Force vision of his late father Han Solo, who implores his son to go back home with Leia in a similar way he did long ago when Kylo confronted him on Starkiller Base, but Ren determines that he is no longer Ben Solo and stabs the Han vision, which fades away. While the Resistance leads an uprising against the First Order with the aid of many newfound allies against Hux and his forces, Kylo makes it to the Temple of Mortis and encounters Rey, determining to her that he is stronger than Anakin Skywalker. He offers Rey to rule together like the Ancients did in the past, but Rey firmly turns down his offer upon revealing something Ren never told her: her parents didn't sell her on Jakku for drinking money; Kylo Ren and the Knights of Ren killed them under the orders of the late Supreme Leader Snoke. Concluding that Rey will not join him nor let him get the power of Mortis, Kylo engages with Rey in a ferocious lightsaber duel to determine the fate of the galaxy.

While fighting for Mortis' power, Kylo Ren manages to injure Rey, blinding her upon striking her across the face. Deeming the last Jedi no longer a threat, Ren leaves a bleeding Rey behind on the steps of the temple. Kylo then reaches the temple's cavern, where he finds status of the Father, the Daughter and the Son but not the reward he wanted upon looking at the heart of Mortis, which is empty. Furious, Kylo slashes the statues of the Ancients before Luke's spirit appears and tells him that he has lost. Kylo denies it but Luke assures him that the dark side failed him like it failed Vader, whose love for his family saved him unlike his grandson. Kylo reiterates that he chose power and did what he needed, but Luke responds that he chose hate. Irked, Kylo tries to attack Luke's spirit, but Luke catches his lightsaber with an inimaginable strength and assures him that he is no Skywalker when Kylo says that he will be stronger than any Skywalker has ever been.

Meanwhile, Luke uses the Force to bound Leia and Finn and they all encourage Rey to still fight against Kylo Ren. Realizing that their Jedi Masters were wrong and that she will not deny her anger nor reject her love, proclaiming herself as both the dark and light sides of the Force, a blindfolded Rey engages Ren in a definitive duel. At one point, Rey severs with a vicious swing several of Kylo's left fingers, but Kylo starts to drain Rey's Living Force until he restores his face and severed fingers, declaring that the power of Mortis can't be taken but is nothing compared to the last Jedi. However, upon hearing Leia's voice imploring him to help us and realizing that his quest was meaningless, Kylo ends up taking Rey's hand and the Living Force flows back to her, reducing Ren into an empty shell. In his last moments before dying in Rey's arms, he tells Rey that her surname is Solana just before expiring while gazing at her with a look that can be perceived as love, meaning that Ben Solo returned to the light side in the very last moments of his life.

With Kylo Ren gone, Rey gets her eyes restored and is temporarily sent to the Netherworld of the Force with Luke, Yoda and Obi-Wan Kenobi before returning to the realm of the living. On the other hand, the First Order ends up losing their fight against the Resistance, leading Hux to commit suicide and the Capitol to jump to lightspeed into a star thanks to Rose's programming. Sometime afterwards, Rey starts a new Jedi Order, bringing hope and peace to the galaxy at last, thus leaving Kylo Ren's plans for conquest and power in vain.

Colin Trevorrow presented his Duel of the Fates script to Lucasfilm in December 2016, which was read by both Star Wars creator George Lucas and actor Mark Hamill. Unfortunately, Carrie Fisher's unexpected death altered his plans and forced him to rewrite the script he had written with Derek Connolly, even asking playwright Jack Thorne to rewrite it. However, producer Kathleen Kennedy ultimately realized that Trevorrow wasn't the right person for the job during the initial scripting phase and ultimately fired him before rehiring J.J. Abrams, director of Star Wars: Episode VII - The Force Awakens, to direct the film, which was renamed Star Wars: Episode IX - The Rise of Skywalker and released in 2019. While the final version retained some elements from Trevorrow's script, Kylo Ren redeemed back into Ben Solo much earlier in Abrams' film and Emperor Palpatine was brought back from the dead to reveal him as the one behind the deaths of Rey's parents, including making him Rey's grandfather. 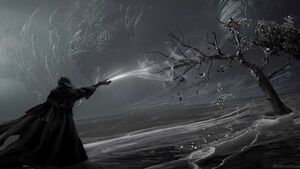 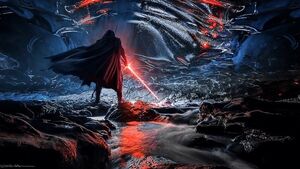 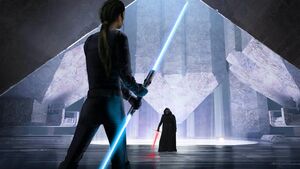