Jelly the Octopus was intended to be a boss in the 2017 video game Cuphead. He was a large yellow octopus that was intended to be one of the debtors that sold his soul to The Devil, and tries to kill Cuphead and Mugman when they come to collect.

Jelly the Octopus would have been the boss of the level "The Airship", which would have been a level in Inkwell Isle 1 and taken place on a pirate-like ship suspended in the air by balloons.

In the fight, Jelly would charge around the area in an attempt to ram the player. Jelly would not have taken damage normally. Instead, the only way to deal damage would have been to parry his antenna. After doing so and dealing damage, Jelly would gain additional speed after each successful parry. After defeating him, it is assumed the player would collect his soul contract like with the other bosses. In the end of the completed game, all of the debtors are freed and redeem themselves, so it assumed Jelly would have done the same.

The boss was likely cut due to time constraints or the method of defeating him being too different or too confusing. However, he was cut late in development, as the boss was fully animated and the fight was even playable at E3 2015. The level was also accessible in the game's debug mode for a time before a patch removed it, and attempting to access it will now softlock the game. 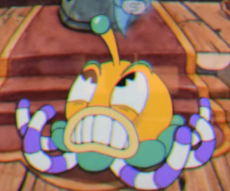 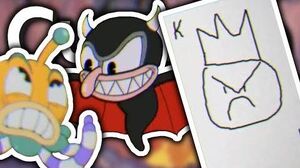