Have Ayano finish off rivals then finish her (original)

Info-chan is the deuteragonist of the unfinished video game Yandere Simulator, though at certain points of development she was intended to be the game's main antagonist. She is a mysterious individual that serves as Ayano Aishi's information broker and partner in crime, providing her with information and weapons, and is the one who encouraged Ayano to begin her life of crime.

She was voiced by Cayla Martin.

Little to nothing is known about Info-chan other than the fact that her parents are unaware of her actions, she has contacts in the criminal underworld, and her hacking and computer skills are advanced. She aids Ayano Aishi in her plans to make her Senpai fall in love with her, doing so by disposing of rivals and the like, though her reason for helping Ayano is unknown. She is only seen through computer screens.

In earlier builds, Info-chan was the one who encouraged Ayano to begin her violent criminal ways, encouraging it so that she could boos the school's newspaper. In later versions, she offers her services and encourages Ayano to begin her life of crime after noticing her stalk her Senpai.

In exchange for the information on other students that Info-chan provides, she asks for Ayano to send her panty shots of the various girls of the school. Info-chan then sells the lewd photos to people online for money. The information she provides is detailed, covering the student's name, date of birth, likes, dislikes, crushes, personality, and additional information. She will also inform Ayano of new rivals. If enough panty shots are provided, she can offer weapons for sale to Ayano, with the only weapons she cannot get being guns. She encourages Ayano to torture and kill other students, especially her love rivals.

In early drafts of the game's story, it would have been revealed that Info-chan was actually the main antagonist, who possibly would have revealed herself to have manipulated Ayano to dispose of rivals so she could dispose of Ayano and get together with Senpai. This would have ended with Info-chan confronting Ayano on the school's roof during a thunderstorm, and a climactic knife fight would proceed. However, the game's developer "YandereDev" scrapped this idea, and kept the true motivation behind Info-chan's betrayal a secret. YandereDev later stated that Info-chan's identity and motivation would serve as a plot twist in the game, but not the one where she is the main antagonist.

The game remained in development for years, with no signs of being finished. After a series of unfortunate events, including a breakup between developer "YandereDev" and publisher tinyGame, the game's ban from Twitch, issues with YandereDev's mental health, and the trend of "cancel culture" finding the game's content offensive, the game however is still in progress.

Info-chan was described by the game's later-removed Persona system as "Evil"; she is manipulative, cunning, tricky, and uncaring of others' suffering. She encourages torture, murder, suicide, bullying and more if it means her goals can continue. She is indifferent to others, whether in affection or disdain, and does not feel any remorse for crimes such as her distribution of revenge pornography, driving students to suicide, hacking, and encouraging countless murders and tortures. In early versions she did all of this simply for her enjoyment of turmoil.

She is also shown to be incredibly intelligent and resourceful, able to learn practically anything she wants to and keep all forms of identifying herself secret. She is arrogant and confident, believing in her skills and tactics. 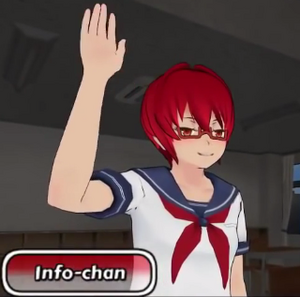 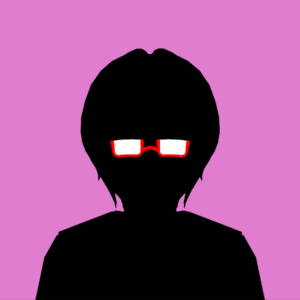 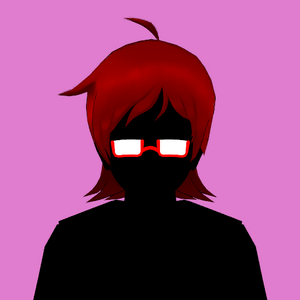 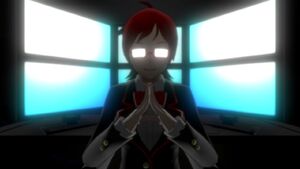 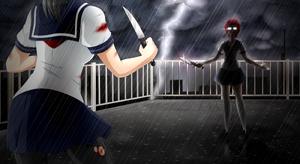 Concept art of the scrapped climax 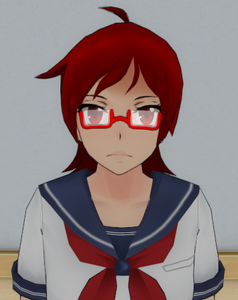 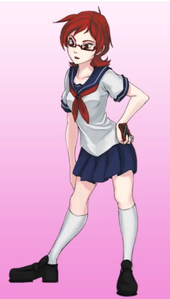