Hover Turrets, also known as Laser Turrets, were a type of Aperture Science Turret intended to appear in the 2011 puzzle video game Portal 2.

Hover Turrets would have, despite their name, not actually hovered, but would have been suspended by cables from the ceiling. When the player approached, they would begin emitting a blue laser beam from their eye that would damage and eventually kill the player's character. They would rotate on their cables, following the player. If the cables were cut, the Hover Turret would not fire its laser again until it hit the ground, and then could be briefly picked up and carried before exploding.

Though their main design is not fully known, it was revealed in the digital behind-the-scenes e-book Portal 2 - The Final Hours that their models would have resembled the Curiosity Core from the first Portal game, with their colors changing depending if they were tethered to the ceiling, falling, or on the floor.

The Hover Turrets were removed for an unknown reason, but it is speculated that they were too difficult an obstacle. The Turrets' code still exists in the game, but without a proper model or AI, and spawning it in using commands will only result in a missing-texture "ERROR" model with a blue laser.

Despite not appearing in the final product, blueprints still appear on the Pneumatic Diversity Vent screens in the game. 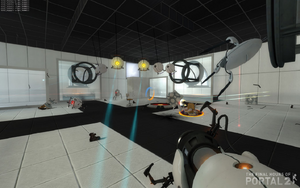 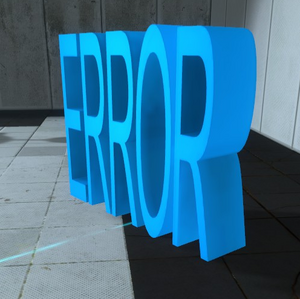 Resulting model if the Hover Turret is spawned in the final release.