The Giant Spider, also known as the Flying Gentleman, was intended to be a boss in the 2017 video game Cuphead. He was a large grey spider in a suit and top hat that was intended to be one of the debtors that sold his soul to The Devil, and tries to kill Cuphead and Mugman when they come to collect. 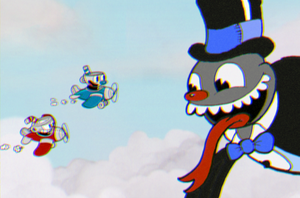