The Gang 9 and Gang 10 are a criminal gang which was intended to appear in Grand Theft Auto III and Grand Theft Auto: San Andreas, two of Rockstar Games' biggest hits. They are an Hispanic Street gang which operate in Liberty City and San Andreas. They were cut from the finished games but their presence is still mentioned in the game's code.

While their presence in Grand Theft Auto III isn't totally known, it's known that for Grand Theft Auto: San Andreas the game's developers originally intended to have 10 unique gangs (either for Los Santos or San Andreas at whole is beyond anyone's speculation). Among them, there were two gangs known as "Gang 9" and "Gang 10". Their appearance was obtained upon using cheat codes or mods, which serve in San Andreas but not in III.

Taking into account their appearance via cheats, the gang members of Gangs 9 and 10 were to use the same character models from the Varrios Los Aztecas with no change in regards to their external look. However, the gangmembers of Gangs 9 and 10 weren't intended to attack Carl Johnson at first sight nor confront him if he strated too far inside their gang area. They were to drive Sentinels as well. If spawned via the cheats, however, Gangs 9 and 10 will act like if they were members of the San Fierro Rifa, using pistols automatically in spite of being unarmed by default if anyone crashes their Sentinels or attempts to attack them with melee weapons.

Unfortunately, the game's developers forgot or never finished Gangs 9 and 10 during the development of the game and, possibly to not delay San Andreas release, they opted to cut them and leave just eight gangs for CJ to confront. 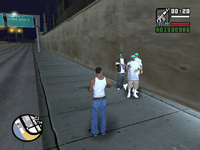 Carl Johnson in front of some Gang 9 and Gang 10 gangmembers
Add a photo to this gallery
Retrieved from "https://unpublished-villains.fandom.com/wiki/Gang_9_and_Gang_10?oldid=1704"
Community content is available under CC-BY-SA unless otherwise noted.