Seduce her adoptive fathers and kill her entire adoptive family if she fails (mostly succeeded).

Leena Klammer, mostly known as Esther Coleman, is the main antagonist of the 2009 horror film Orphan. Although she is completely insane and irredeemable in the final product as well the film's alternate ending, the original script painted her in a more sympathetic light.

She was portrayed by Isabelle Fuhrman in the final project.

On April 20, 1976, Leena Klammer was born in Estonia. Unfortunately, she suffered from a form of dwarfism called hypopituitarism that caused her to stay in the appearance of a young child for her entire life. When she was little, her mother died of AIDS. Understandably, her mother's death caused her to be extremely depressed. She spent most of her childhood being raped and sexually abused by her father, rendering her infertile. And because of her current age, it is possible that her joy for violent esctasy was heightened by some of the hormones that was displayed in her system. He raped her so much to the point, where his daughter found an unhealthy addiction to sex. (Which could suggest why she seduces her adopted fathers, rather than other men) And her dangerous mental illness was also taken by the stakes. Esther saw nothing wrong with it and so, disgustingly, she welcomed her father's incest acts of affection.

Esther's life worsened over time, when her father found a lover. The said lover taunted Esther about her condition, which caused the girl to despise her and her father, for leaving her in the dark. He threw her aside, as he took more interest in his lover. Eventually, Esther's sanity shattered when he snapped at her, telling her that she'd never be a real woman. Out of heartbreak, jealousy and hatred, she murdered her father and the lover, brutally.

Consequently, Esther was sent to a mental institution called Saarne, where she used to be put into a straitjacket, which left her with scars for being too violent. She was known for her strongly hateful behavior towards everyone in the institution and eventually, slaughtered seven people that the facility had the knowledge of. She then escaped from the institution and became a prostitute who would have sex with wealthy pedophilic whoremongers. The authorities found out about this and arrested her, but fortunately for her, she managed to evade imprisonment by pretending to be a child. The police, falling for the act, delivered her to an orphanage. It is implied that Esther/Leena did not get along with the other children and even in the original script, murdered a girl named Yolanda. (Which Kate and John were originally meant to adopt) But in order to take Yolanda's place, Esther murdered her and stashed her corpse in a closet and successfully won the Coleman's over.

Because of all the sexual abuse she suffered at the hands of her father along with her dwarfism, she became desperate to find love and ended up trying to seduce her adoptive fathers, and this was where the plot of the film unfolds.

In the alternate ending, after surviving her injuries from being crushed by Kate, Esther puts on make-up, dons a white dress, and walks downstairs casually saying to the cops, “Hello, my name is Esther!”. It can be assumed that Esther was arrested afterwards now that her crimes have been exposed by Kate and will be sentenced to life imprisonment for her serial killing. 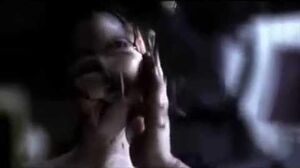