Sell fake paintings of prominent artists to make a profit for it (ongoing).

Get Henri Fourcart and Jacques Monastir killed and make their deaths to look like accidents (succeeded).,
Kill Tintin by covering him in polyester liquid and sell him as a work of César Baldiccini (unknown if succeeded or failed).

Mysterious Con-Artist
Endaddine Akass is the main antagonist of the final The Adventures of Tintin book Tintin and Alph-Art, which went unfinished and not officially published following Hergé's death. He is a Jamaican spiritual guru and stage magician who secretly runs a falsification ring which sells fake paintings of prominent artists to museum and collections under the name of "Alph-Art".

Endadinne Akass was intended to be the main antagonist of Tintin and Alph-Art, the final book of The Adventures of Tintin comic book series, written by the renowned French writer Hergé. As Hergé's health was already declining by the time he started working on the book, Hergé likely knew that Alph-Art was going to be the final installment of the series, so he wrote it as a grand conclusion to Tintin's adventures. But the story was never meant to be finished, sadly. The following information regarding Akass was retrieved thanks to the publication of some of Hergé's concept art, notes and manuscript.

Endaddine Akass is a charismatic Jamaican spiritual guru with a shady past well known in the stage who has villa on Ischia. He is an acquaintance of Bianca Castafiore, who talks highly about him to the point of musing that he could hypnotize a person for a whole year. Shortly after the deaths of art expert Jacques Monastir and museum director Henri Fourcart as well an attempt on Tintin's life while investigating the death of the former, Tintin and Captain Haddock attend one of Akass' performances. During the performance, as Tintin suspects that Akass' voice is familiar to him, Akass senses a hostil presence and asks the audience to meditate with him only to then fill each of them with the universe's energy. After the show, Tintin and Haddock accompany Martine Vandezande, Mr. Fourcart's former secretary, to her home after she shows them a pendant Akass magnetized for her.

The next night, Tintin fails to set up Fourcart's murders but deduces that Miss Martine's pendant had a micro-transmitter concealed, presumably by Akass, to spy on Fourcart. Suspecting of Akass, Tintin and Haddock go to Akass' villa on Ischia, where Castafiore receives and informs them that Endaddine is currently on Rome but will return tomorrow as Haddock meets again Ramó Nash, who sold him a rocky H sculpture from his new art style known as Alph-Art. That night, however, Tintin discovers a collection of Alph-Art with fake paintings on prominent artists only to be discovered by Akass and his men, who reveals to be in cahoots with Ramó Nash and to have killed Fourcart and Monastir for trying to expose his forgery business. Due messing up with his operations, Akass orders Tintin to be taken away before transforming him into a polyester liquid sculpture tomorrow to be sold as a work of César Baldiccini.

Tintin is unable to escape from his cell but asks Milu to give Haddock a message to rescue him. The next day, one of Akass' henchmen brutally awakes Tintin and takes him at gunpoint towards another room to be transformed into a "César". What happens afterwards is completely unknown, and who Akass really is, is unclear as well. However, it's evident to assume that Tintin may have escaped this ordeal and survive to unmask Akass. Neverthless, this is beyond anyone's speculation.

Unfortunately, it's at this point that the story comes to an end, as this was the last vignette in which Hergé worked before his untimely death in 1983. It's completely unknown what plans had Hergé for the ending or if Endaddine Akass was really a new character or a person from Tintin's past. Bob de Moor initially expressed interest on finishing the story, but while Fanny Remi, Hergé's widow, initially approved the decision, she later changed her mind and insisted on publishing the sketches and designs her husband made for the story. Several French artists, most notably Yves Rodier, have published their own illegal versions of Tintin and Alph-Art, but their attempts to get them published as an official book have been all but thwarted by Moulinsart and the Hergé Foundation. As of today, there's no chance that the story of Tintin and Alph-Art will ever be resolved, as Hergé made clear his intentions to not have anyone continue writing The Adventures of Tintin after his death. 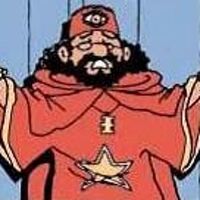