Get revenge on Nintendo for abandoning him. (ongoing)

Elh was an unused antagonist and boss in the 2001 video game Luigi's Mansion.

When hacking into the final game's files, it reveals a pale figure with screwed (seemingly) support-beams as a body and long arms, but the design is missing a head. It had a seemingly floating animation when going forwards. 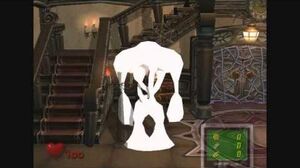