Shadow of the Colossus

Kill anyone who comes near it.

The Devil, nicknamed Pholux by fans, was a boss intended to appear in the 2005 video game Shadow of the Colossus.

Like the other colossi in the game, the Devil would have been created by Lord Emon to contain the fragmented essence of the defeated evil Dormin. He set them all to wander the Forbidden Lands, destroying anyone that comes their way, so that Dormin could never be resurrected. When a young man named Wander trespasses in the Forbidden Lands and asks the disembodied spirit of Dormin to resurrect his deceased lover Mono, Dormin agrees under the condition that Wander kills all of the colossi (tricking Wander into releasing his essence so he may be reborn). Wander agrees, and sets off. The Devil would have been found in its own area called the "Devil's Plain", a large open field in Quadrant H2.

The Devil would have been a smaller, humanoid colossus that would fly around an area. The player would have to shoot at it with their bow to get its attention, then hide in the tall grass. When the Devil searched the grass, the player would have to sneak and climb onto its back to reach its sigil and stab it. Upon reaching its back, the Devil would take flight again and try to shake Wander off. It may have required a few attempts to defeat it.

Once the Devil was dead, the fragmental part of Dormin will bring Wander back to the Shrine of Worship, where he will be prepared to face his next foe.

Though it is currently unknown why the Devil was cut from the game, it was likely simply to lower the amount of foes faced, and the sixteen that made it into the game were simply better-liked. 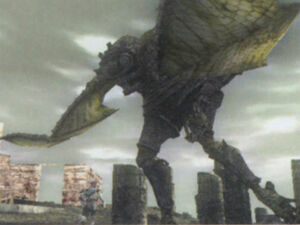 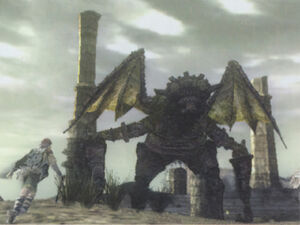 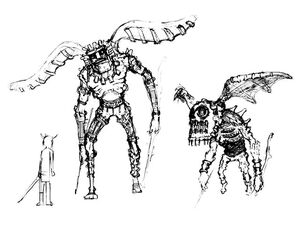 Concept art
Add a photo to this gallery
Retrieved from "https://unpublished-villains.fandom.com/wiki/Devil_(Shadow_of_the_Colossus)?oldid=3154"
Community content is available under CC-BY-SA unless otherwise noted.