Mastery of the Dark Side of the Force

Kill the Jedi Knight who saved her on his sleep (succeeded)

Traitorous False Victim
While originally created for the Star Wars: Legacy comic book series from Dark Horse Comics, a different rendition of Darth Talon was once set to make an appearance as a major antagonist of the Star Wars sequel trilogy during the early development process of Star Wars: Episode VII - The Force Awakens, the trilogy's first installment. Supposedly, Talon was going to be responsible for leading the son of Han Solo and Leia Organa to fall to the Dark Side of the Force.

In the Legacy comics, Talon was a Twi'lek Sith Lord who served the evil Darth Krayt, the leader of the One Sith, a powerful Sith order seeking galactic domination which is active more than one hundred years after the events of Star Wars: Episode VI - Return of the Jedi. These stories, however, are now classified as part of the Star Wars Legends continuity and are no longer regarded canonical since Lucasfilm's buyout by Disney in 2012.

Darth Talon made her first appearance in the Star Wars: Legacy comic book series, which was published from 2006 to 2010. She was created by writer John Ostrander and designed by artist Jan Duursema. As previously mentioned, Talon served as one of the most recurring antagonists in the series. While these stories are no longer considered canon, Talon is still remembered by many Star Wars fans as one of the most iconic Expanded Universe character partly because her scantily-clad appearance, aside that George Lucas himself approved the character.

In spite of this, existing storyboards published in The Art of Star Wars: The Force Awakens art book demonstrate that Darth Talon was initially planned to be featured in Star Wars: Episode VII - The Force Awakens, the sequel trilogy's first installment. As the Legacy comics are no more canonical, this new incarnation of Talon (or similar character inspired by her look) would have played a different role to that the original played in the comics. While what role Talon was to exactly play in the film is unknown, the present drawings suggest the following:

In spite of these pieces concept art, Lucasfilm asset specialist Phil Szostak stated that Darth Talon's presence in story of The Force Awakens wasn't thought at all. However, it's unknown then why one piece of concept art featuring Talon is a storyboard, as storyboards are generally drawn after the script is finished, possibly meaning that J.J. Abrams and Michael Arndt had included Talon in the film's script. As a result, Pablo Hidalgo from the Lucasfilm Story Group revealed that before George Lucas retired from Lucasfilm, his plans for the sequel trilogy involved having Talon corrupting the son of Han Solo and Leia Organa to the Dark Side of the Force, as the idea of a son falling into darkness was always in the mix. From all what can be said, the only sure thing about Talon's role in the film was that she would appear as a major antagonist.

Regardless, Lucas left the development of The Force Awakens once it became clear that Disney would not use his ideas, having been reportedly felt dissatisfied with the finished film. Ultimately, the role of main antagonist was given to Kylo Ren, the son of Han Solo and Leia Organa, so it can be said that the characters of Talon and the son were mixed into one. Similarly, the Uber character evolved into Supreme Leader Snoke. 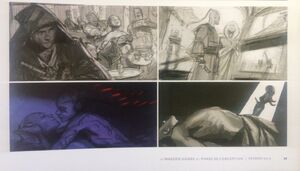