Egotistic Writer
Craig Black is one of the two targets (alongside Brother Akram) and the main antagonist in mission The Author, the second mission in HITMAN: Patient Zero. He is a renowned author of Canssandra Snow fame, and one of the sleeper agents of the doomsday cult "Liberation."

However, according to a leaked list of unused Elusive Targets on Reddit, as well as a leaked unused briefing video, it is revealed that Black's concept was originally conceived as an Elusive Target in a mission, also known as "The Author".

Notably, Black is one of the five unused Elusive Targets that later got reused and became mission targets in Patient Zero, alongside Oybek Nabazov, Bradley Paine, Brother Akram and Owen Cage.

According to the original leaked list on Reddit, there was a target named Lawrence Wilson who was also known as the Author, possibly serving as Black's prototype. Beyond that, nothing else is known about this target.

According to the unused briefing, which featured a much more detailed (but still unused) early version of Craig Black's assassination, Black's hit was originally contracted by the true author of the Cassandra Snow series; a nameless person who served as the ghost writer for Black. The client had all of his credit stolen by Black and wanted revenge by hiring Agent 47 to assassinate Black as a result.

In addition to eliminating Black, a phone containing the draft of Black's next book was to be obtained as to prevent a posthumous release. Like other earlier version of Liberation agents, this rendition of Black was also unrelated to Nabazov. 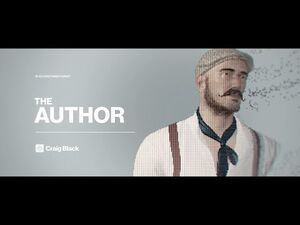