Use his electric powers to manipulate things

Power Hungry Capitalist
Carlton Strand was the main antagonist in James Cameron's scriptment for a Spider-Man feature film planned to be produced by Carolco Pictures around the early 1990s which never got made due budgetary and legal reasons. Unlike his comic book counterpart, Carlton Strand would have served as the film version of Electro in the film, being a corrupt capitalist who acquired his powers after a lightning field accident in New Mexico.

He was intended to be portrayed by Lance Henriksen.

Since the 1980s, a live-action Spider-Man feature film was being planned by different studios over the years, going from Cannon Films to 21st Century Fox. By the early 1990s, Carolco Pictures had gained the rights for the Spider-Man film and James Cameron, the renowned director of The Terminator and Aliens, was hired to direct and write the film before finishing the shooting of True Lies, as reported by the Variety magazine. Said and done, Cameron submitted a 57-page scriptment to Carolco months later, but with some variation from the original source in regards of the antagonists he planned to use, Electro and Sandman, with rumors assuring that Cameron intended to cast Lance Henriksen, one of his most frequent collaborators.

Instead of Max Dyllon, an innocent engineer who got his powers upon being struck by a lightning, the true name of Cameron's version of Electro would have been Carlton Strand, a man who acquired his powers years ago when trying to run away from the police for stealing mercury in New Mexico. In desperation, Strand ran to the Lightning Field House and got electrocuted by the Lightning Field. However, Strand survived and deduced that the leader of his gang had set him up. After killing all members of his gang, Strand took over the leadership of the syndicate and its resources legally, but quickly resolved to use his new abilities to make a profit by manipulating bank transfers, the stock market and murdering everyone who stood up on his way.

By the time of the film's events, Strand would have been a millionaire capitalist. He was married to a woman named Cordelia whom he couldn't touch without threatening her life with his powers. Upon hearing about the famous Spider-Man, Strand orders his right-hand Boyd, a shapeshifter endowed through a nuclear blast with the ability to turn himself into sand and whom Strand discovered doing nickel and dime bank jobs with his powers, to find everything about Spidey. Later on, Spidey meets Cordelia, who gives him a note before Boyd gives him a beating. Some time after Ben Parker is murdered by a carjacker and Spider-Man resolves to become a vigilante to make justice while becoming a controversial figure in the process thanks due J. Jonah Jameson's claims, Spider-Man meets Strand on his Manhattan mansion, who tries to sway him to his cause.

However, upon realizing Strand's nature, Spider-Man would have declared him his enemy, leading to a scuffle on Strand's mansion with Carlton and Boyd trying to beat out the wall-crawler and unmask him before Spidey makes his way off the mansion. Declaring a campaign against Spider-Man, Strand buys The Daily Bugle and offers Jameson an unlimited budget to bash Spidey so he can make the world such an hostile place for the hero until he will be driven back to him. Strand would have even ordered his thugs to dress like Spider-Man and wreak havoc on Spidey's name until the people lost faith on the wall-crawler. During all these time, Strand oversees the Spider-Man sightings and incidents, knowing which are real and which are faked to discredit him. However, some people stand up towards the claims of Jameson and Strand, like Mary Jane Watson, who doesn't think Spider-Man is a menace because he saved her.

The next day after Watson's interview, Boyd would come to Strand with a tape of his, which had shot Spider-Man's and Mary Jane's romantic night on the Brooklyn Bridge. Under Strand's orders, Boyd would kidnap Watson from her house and Jameson would air the tape but heavily edited to make it look that Spider-Man had kidnapped her. On his hurry to prepare for one last confrontation at the World Trade Center (the September 11 attacks hadn't happened yet when Cameron wrote the film, hence the setting), Strand would have kissed Cordelia but not staying to jumpstart her, causing her death to set up Spidey so the SWAT operatives who found him will believe him to have murdered her, leading the police to start a manhunt for Spider-Man, who tracks down Strand and Boyd to the World Trade Center. Upon being asked by Spider-Man to let Mary Jane go, Strand shrugs and lets her go as she just had been a lure, once more trying to sway Spider-Man to his side upon taking away his web-shooters, insisting him on letting go his humanity and join him in wreaking havoc over the world.

As Spider-Man refuses yet again, Strand forcibly kisses Mary Jane until momentarily rendering her into a coman and then reviving her to provoke Spidey to prove him that he's a spider and a killer like. Having enough, Spider-Man goes berserk and confronts Strand and Boyd, getting Mary Jane out of their way and leaving her in a safe location. Strand and Boyd follow him to the rooftop of the tower and Strand shoots electric lightnings towards Spidey, who would lasso Boyd and pull him on Strand's way, accidentally killing Boyd by encasing his corpse on glass. Losing what was left of his sanity, Strand desperately tries to kill Spider-Man until he gets knocked off the building. Although Spidey tries to save him, Strand would have been hit against steel columns, heavily injuring him. In his dying moments, Carlton disovers Spider-Man's real identity as Peter Parker when Parker unmasks himself in front of him. Before expiring, Carlton asks him about his name and if he is senior, leading Parker to say that he will be soon graduating next week, which in turns leads Strand to chuckle weakly and express his sentiment that it was unbelievable to then die.

Unfortunately, Cameron's film never went beyond from pre-production due budgetary and legal issues with Carolco Pictures, which filled for bankrupty and went defunct in 1995. Arnold Schwarzenegger, whom Cameron reportedly wanted to cast as Doctor Octopus, mentioned in a 2012 interview with the Empire magazine that while there was interest for Cameron's film, it never materialized nor got ahead due frequent battles Cameron had with the studio, which choose to go in another direction as there was no script before the rights were transferred to MGM and then to Columbia Pictures, which eventually culminated with the release of Sam Raimi's Spider-Man film in 2002, which proved to be a huge critical and financial success. In regards of Electro, however, it wasn't until the film series was rebooted in the 2010s that an incarnation of Electro portrayed by Jammie Fox was featured in the 2014 film The Amazing Spider-Man 2, but such incarnation was heavily panned. Carlton Strand gets his powers. 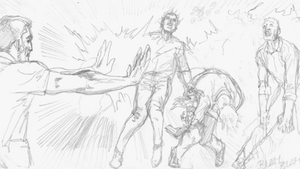 Retrieved from "https://unpublished-villains.fandom.com/wiki/Carlton_Strand?oldid=1605"
Community content is available under CC-BY-SA unless otherwise noted.