Marry Rose DeWitt Bukater (failed).
Kill Fabrizio De Rossi for trying to board his lifeboat.
Escape the Titanic (both succeeded).
Apologize to Rose so she will come back with him (failed).

Egotistical Love Rival
Caledon "Cal" Hockley (March 17, 1882 – December 15, 1929) is the main antagonist of James Cameron's hit 1997 film Titanic. Although he is envious and abusive in the final product, some deleted concepts from the original script that didn't make it into the finished film painted him a little bit darker yet later apparently remorseful.

He was portrayed by Billy Zane like in the final project.

In the original script for the film, after several third-class passengers, including Jack Dawson's friend Fabrizio De Rossi, manage to avoid a falling smokestack during the sinking of the Titanic (in contrast to the finished film, where Fabrizio and other third-class passengers are crushed to death by the smokestack), Cal uses an oar to defend his lifeboat alongside his fellow survivors to not let other passengers to board the boat so they will not sink it. However, when Fabrizio nearly makes it aboard the lifeboat, Cal ruthlessly clubs Fabrizio with the oar, cutting open his scalp. Before dying from his injuries, Fabrizio pleads Cal to let him board because he must go to America, to which Cal sarcastically tells him to swim there.

During the film's ending, once all the Titanic survivors are aboard the Carpathia, the original script had Cal actually finding Rose on the ship after searching among the passengers. Once Rose tells him that she survived, Cal states that he and Ruth have been looking for her. However, instead of welcoming him, Rose stops Cal and asks him to not see nor talk to her ever again in return for her to keep her silence and not reveal what he did last night so Cal can keep his honor and image. Astonished, Cal asks Rose what he should say to Ruth, to which Rose responds to tell her mother that she died on the Titanic. Stricken for what he did, Cal assures Rose that she is precious for him, but Rose coldly responds that jewels are precious and says goodbye before telling Brock Lovett in the present day about Cal's fate.

Despite the presence of these two scenes featuring Cal being present in the film's script, neither of the two made it actually onscreen, though there's evidence that the scene of Cal killing Fabrizio was actually filmed before Fabrizio's death was rewritten so Cal just witnesses it. Some believe that the first scene was dropped as it would have increased the audience's hatred towards Cal, who by that point, had already become subject of extreme hate due passing a third-class child as his own just to escape. In regards to the second scene, one could argue that it was dropped to not make Cal look sympathetic after all he did against Jack and Rose throughout the film. 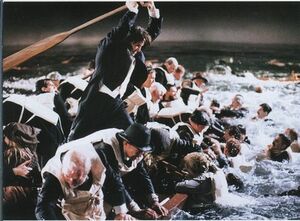 Cal defending his lifeboat with an oar moments before killing Fabrizio