The Monster of the Ocean Depths

Barnacles, also known as The Monster of the Ocean Depths and Mob A, was a type of Hostile Mob that was proposed to appear in the video game Minecraft. It is unknown if it would have been a species or a single boss mob.

In 2017, Mojang held a contest where people could vote on a new type of hostile mob to be added to the game.

Mob A, referred to by Jens "Jeb" Bergensten as the Monster of the Ocean Depths, also called the Barnacle by Jason, would have been a squid-like monster that would have inhabited ocean biomes. It would open and close its massive mouth to propel itself through the water, and if a player were in the water (possibly even in a boat or on an animal), the Monster would extend a tentacle-like tongue and drag them down to drown them in the water.

Despite a positive reception, the mob lost to Mob B, which would later go on to become Phantoms. 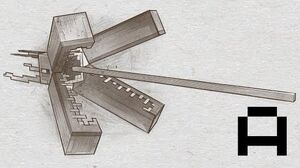 Minecraft Mob Vote Will you pick Mob A during MINECON Earth?