Head of the Internet

To eradicate all Internet viruses.

Delete Wreck-It Ralph and Vanellope von Schweetz from Internet due to deeming them as "viruses".

Totalitarian Artificial Intelligence
Build to Eradicate Viruses, or simply known as B.E.V., was the main antagonist in early versions of Ralph Breaks the Internet, the sequel to Wreck-It Ralph. She/He would have been an antivirus software whose task was to delete all viruses to keep the Internet safe. In spite of her/his noble duty, B.E.V. was a cold-hearted and fascist virtual officer who would try to delete Wreck-It Ralph and Vanellope von Schweetz from Internet due to deeming them as viruses. However, B.E.V. was ultimately dropped from the finished product and Ralph's insecurities turned into the main antagonist, yet B.E.V. was later reimagined for The Void's virtual reality simulator Ralph Breaks VR.

She was voiced by screenwriter Pamela Ribon in Ralph Breaks VR.

In early versions of Ralph Breaks the Internet, the sequel to the well received Wreck-It Ralph film, there was a main antagonist like in most Disney films for the protagonist to defeat. That character was B.E.V., the overlord of the Internet and leader of a peacekeeper organization whose goal was to eradicate all viruses to maintain the interconnected networks safe from any danger. However, when Wreck-It Ralph and Vanellope von Schweetz, the respective main characters of the video games Fix-It Felix Jr. and Sugar Rush, come to the Internet to buy a new steering wheel for Vanellope's game, B.E.V. targets them and starts hunting them down to delete them, deeming them as "viruses".

B.E.V. underwent through several iterations during the film's planning phase. She mostly posed as a sweet Midwestern lady but secretly a manipulative villain, likely in the first proposed version. In another one, B.E.V. was an antagonistic yet well-meaning security virtual official who sought to protect the Internet by any means necessary, presenting her in a more sympathetic light. In some other versions, however, B.E.V. was depicted like a militaristic male virtual officer with formal and cold demeanor. Neverthless, B.E.V.'s goal remained the same through all these versions: delete Ralph and Vanellope from Internet.

Unfortunately, the filmmakers ultimately opted out to cut B.E.V. from the film's story and favored a narrative following Ralph's insecurities, replacing B.E.V. with Arthur, a Dark Web virus who represents Ralph's internal struggles upon fearing to lose Vanellope, who becomes bored of Sugar Rush and wants to be now on Slaughter Race in the finished film. Despite this, B.E.V. still saw the light of the day when screenwriter Pamela Ribon proposed her/him as the main antagonist of Ralph Breaks VR, a virtual reality simulator by The Void. So while B.E.V.'s loss was lamented specifically by directors Phil Johnston and Rich Moore, they were delighted when Ribon told them that B.E.V. would now be used in other project. 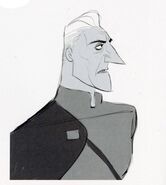