The Legend of Korra

Serve Amon and the Equalists

Asami Sato was intended to be a major antagonist in the Nickelodeon animated television series The Legend of Korra, sequel series to Avatar: The Last Airbender. She would have been a spy for Amon and the Equalists, working with her father to take down Team Avatar and the current Avatar, Korra, from the inside. However, this was changed and Asami was rewritten into a heroic character.

She was voiced by Seychelle Gabriel like in the finished product.

Asami was introduced in the season one episode "The Voice in the Night", where she accidentally runs into Korra's friend Mako with her moped. She apologizes, and this begins a romantic relationship between the two. However, the original plan was for Asami to be faking her relationship with Mako in order to get close to Korra and infiltrate Team Avatar, sabotaging it from the inside. It would have been revealed in a later episode that Asami and her father Hiroshi Sato were both members of the Equalists, a terrorist organization that seeks to remove Bending from their world in order for everyone to be equal in power and status; their leader Amon would use specialized Bloodbending to take away Bender's abilities, with his focus being on the Avatar so he could take out the Bender's greatest asset.

Presumably, Asami's motivation would have been similar to the one her father had in the finished product: when she was six, her mother was murdered by a Firebender of the Agni Kai Triad during a break-in. This would have prompted Asami to swear vengeance on all Benders and aid the Equalists in removing them. She would have served as a spy, tricking Korra and her friends into letting their guards down so they could be captured and have their bending removed by Amon.

However, as the series progressed, the producers began to like Asami as a character, and decided to rewrite her as a heroic character. Instead, she would legitimately help Korra and Team Avatar in trying to stop the Equalists. When she finds out about her father's betrayal, she disowns him instead of joins him. This heroic interpretation would carry over into the finished product and continue into the series' later seasons and spinoffs, with Asami becoming a trusted member of the group and eventually Korra's love interest.

Concepts of Asami's original villainy perhaps inspired some of the events of the Ruins of the Empire comic spinoff, where an evil Earth Kingdom doctor temporarily brainwashes her into believing Korra is her enemy. 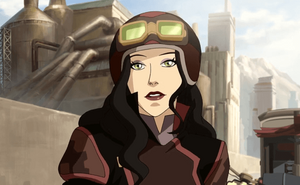 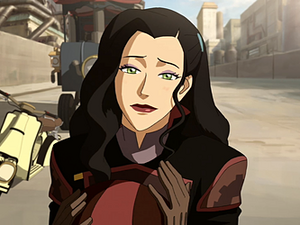 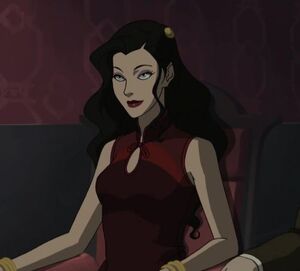 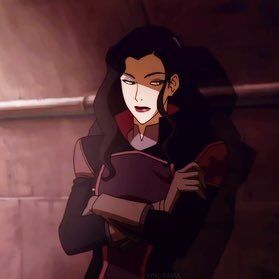