Powers from the Black Cauldron

Find the Black Cauldron in order to use its magic powers and create his own army of undead warriors.

Rule all of the world of Prydain forever.

Hegemonic Warlord
Arawn was intended to be the main antagonist of Disney's 25th full-length animated feature film The Black Cauldron, which is based on the 1960s fantasy novel series The Chronicles of Prydain by the late Lloyd Alexander. Like his original incarnation, he would have been a cruel warlock king who desires to find the Black Cauldron to use his powers to conquer the world of Prydain. He was replaced by the Horned King in the final project, who filled his role as main antagonist whereas Arawn was made the film's posthumous overarching antagonist.

When The Walt Disney Company started development on The Black Cauldron, an animated film adaptation of the late Lloyd Alexander's 1960s The Chronicles of Prydain fantasy novel series, it seemed inevitable to use Arawn Death-Lord, the series' main antagonist, as the main antagonist of the movie. Thus, some concept arts depicting Arawn were developed to explore his look for the film, as it would have been different in comparison to that one he had in the books.

However, throughout the film's development, the animators felt that the Horned King, a major antagonist of The Chronicles of Prydain books, would be better liked by the audience as he had horns much like Maleficent and Chernabog, two of the most classic Disney Villains. Thus, it was decided to use the Horned King instead of Arawn, though some crewmembers didn't find sense in using the Horned King rather than Arawn as they were adapting a book series into a film without featuring its main antagonist.

However, even though the Horned King ultimately filled the role of main antagonist in the film, Arawn still received a role to play in the film, becoming its posthumous overarching antagonist. Though never explicitly referred by name, Arawn is meant to be the spirit contained within the Black Cauldron mentioned during the film's prologue, being the cruel and evil king whose story is told by the narrator. In addition, the face engraved upon the Black Cauldron is apparently intended to be that of Arawn, as well as the one the Horned King curses when he gets killed by the Cauldron following the deaths of the Cauldron Born. 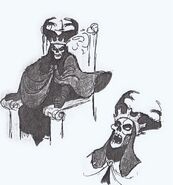